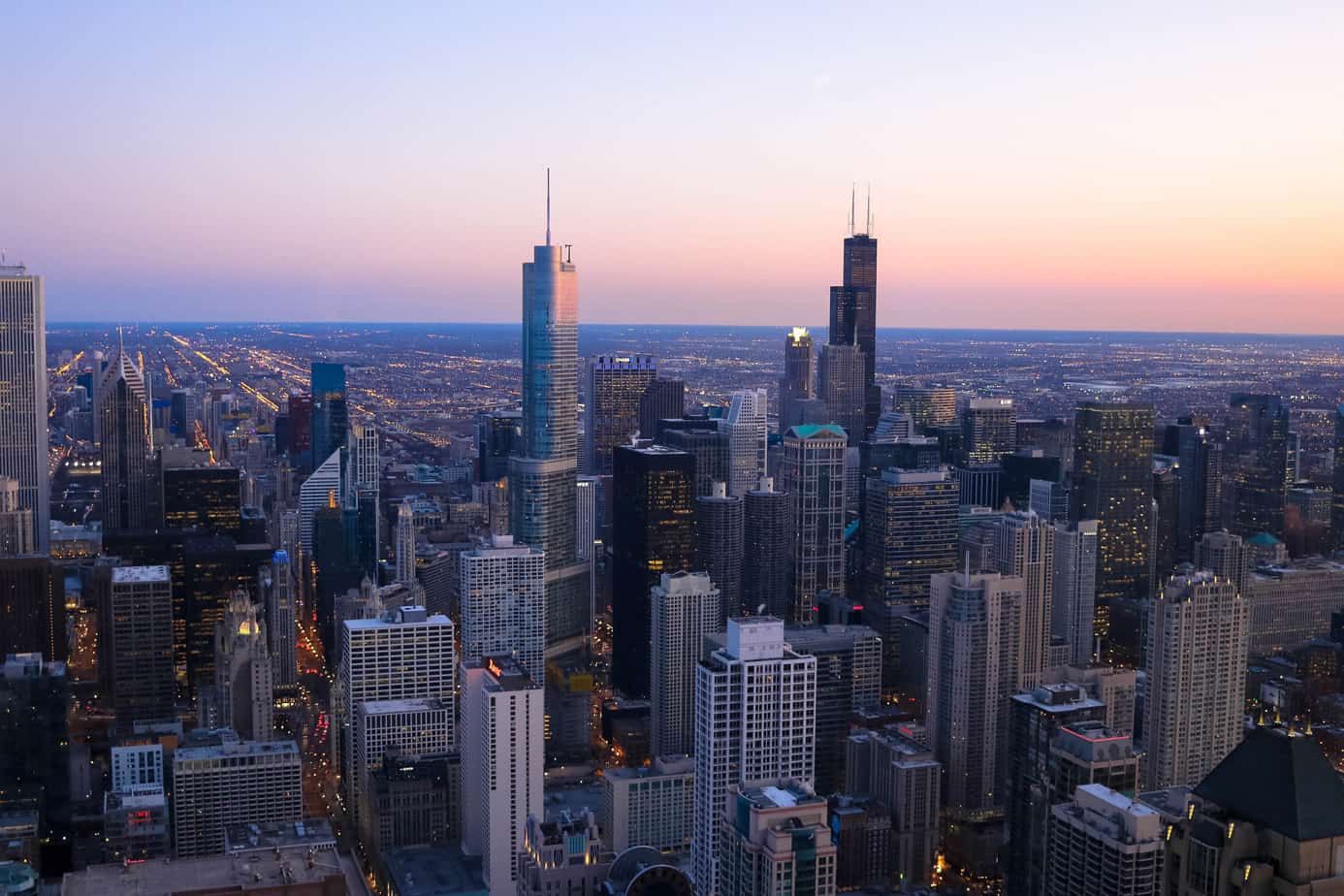 When looking for things to do in Chicago, look no further than 360 Chicago!

360 Chicago has everything; stunning views, interactive experiences where visitors can learn about the city’s rich history, and the thrilling TILT!  It’s one of the coolest things to do in Chicago!  Before visiting, be sure to check the online schedule for the day’s activities as there’s always something fun happening on the 94th floor!

Before I give you the scoop on the happenings, here’s a bit about the 360 Chicago Observation Deck.

Located on the 94th floor of the iconic John Hancock building, 1,000 feet above Michigan Avenue; the observation deck offers stunning 360-degree views of the city’s famous Skyline and scenic Lake Michigan to guests the moment they step off the elevator.  On a clear day, individuals can see as many as four states and as far as 55 miles. Marvelous!  Aside from the views, guests can also learn facts about Chicago neighborhoods and architecture through 18 stations of interactive touchscreens and info kiosks.

The biggest attraction that will get everyone’s heart racing is the one-of-a-kind TILT experience!

TILT is an enclosed moving platform that tilts you out and over the edge of the John Hancock building, 1,000 feet above The Magnificent Mile! The movable platform holds up to eight visitors per cycle.  Although my heart was racing from fear and excitement, I took the plunge!  It was both thrilling and scary! I did it a second time, still scary!  Not a third time, though, twice was enough, lol.  It’s a unique, fun-filled experience that is worth the try.

TILT Photography enthusiasts are encouraged to take advantage of tripod Mondays, the only day tripods are allowed at the observatory.

The new 360 Sky Series offers guests bonus activities, seven days a week, free with paid observatory admission.  So for one admission, guests can take in the stunning views, experience TILT, interactive education, plus the bonus activity for the day. Residents of the city of Chicago will receive a discounted rate as a thank-you from 360 Chicago. Anyone with an ID with a 606 zip code gets into the observation deck for 50% off the regular admission price.

$15 includes entry into 360 Chicago Observation Deck plus a 1-hour yoga class for yoga lovers of all skill levels.  Meditation and gentle flow movements will awaken guests senses before being led through a series of stretches, breath-centered movements, and morning salutations.  Advanced registration is required, and classes are limited to 50 participants. You can sign up on 360 Chicago’s website.

Fun activities designed for families with free TILT for kids from 9:00 a.m.-4 p.m.

Photography buffs are encouraged to visit all day long and invited to bring their tripods onto the observation deck floor to capture shots of the skyline, low-lights, night scenes, stormy skies and more. Throughout the year special classes will be offered along with insta-meets, and social media activations.  Follow the hashtag:  #360TripodMondays and @360Chiviews on Instagram to learn more about upcoming events.

Volunteers from the Chicago Architecture Foundation will provide a birds-eye view tour of the skyline. These volunteers love what they do and are excited to share their knowledge of Chicago as they guide you through all four views from high above the city.

Artists are invited to bring their easels, materials, and creativity to capture the view of the city from above.

Guests will find new releases and favorites from Revolution Brewing on special while listening to a live DJ from Mode Events. Revolution Brewing is the largest independently owned brewery in Illinois and in 2016 was named one of the top 50 brewing companies in the United States by the Brewers Association.  We were among the first to try their new beer Sun Crusher Hoppy Wheat Ale at the event.  It was literally canned the day before at the brewery.  I must say; I’m a fan!

Trivia runs every Friday from 6-8pm during the months of March-June and September-December.  Be sure to pre-register to secure your spot.  Registration is free and includes admission to the Skydeck.

With so much to offer, 360 Chicago Observation Deck is a win for the whole family and a must for Chicagoans and visitors alike. Afterward be sure to check out some of the other neighborhoods in the city.

Feel free to tell me about your visit in the comments below!