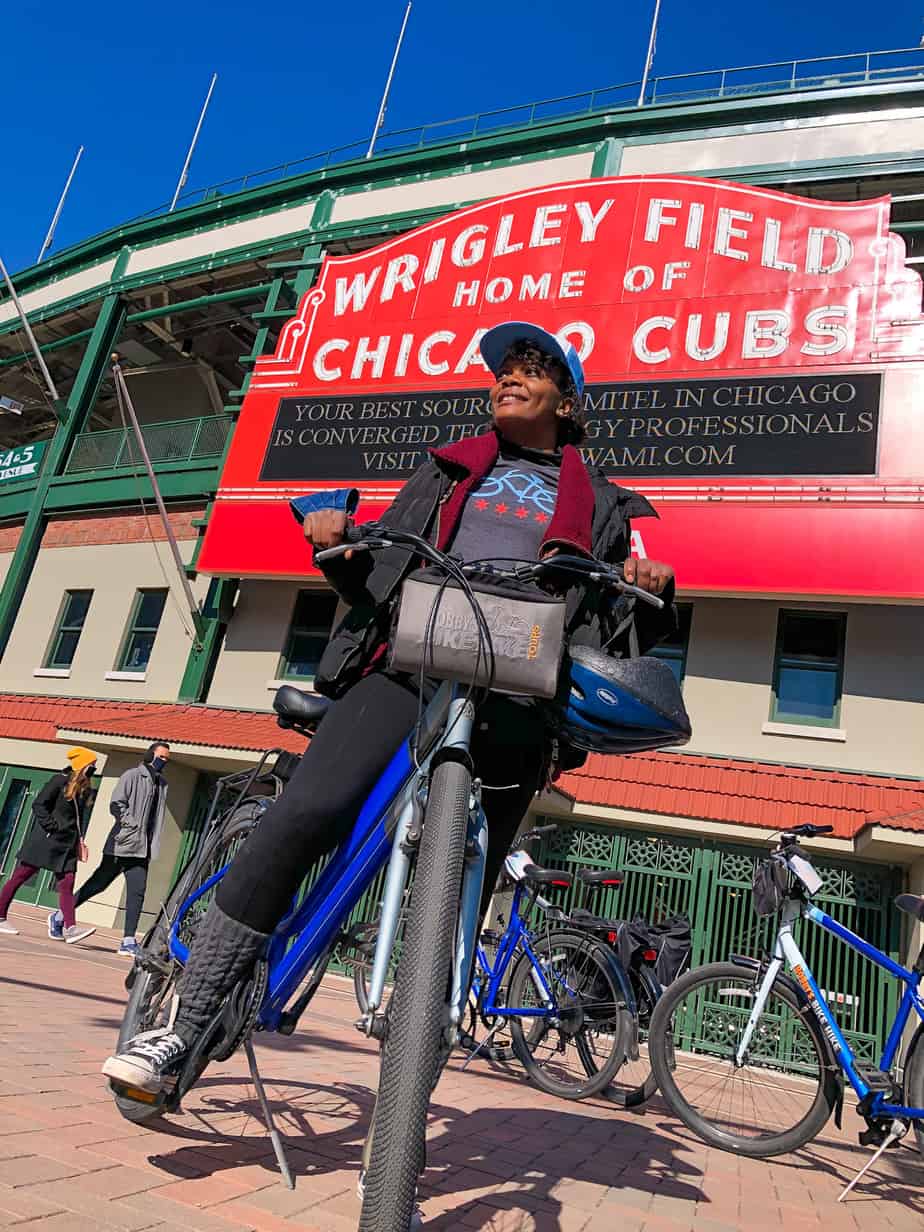 This post contains affiliate links, meaning at no additional cost to you, I will earn a commission if you click through and make a purchase. I have taken the tour discussed in this article and can wholeheartedly recommend it without reservation. Thank you for supporting my blog. Use code Flosfavorites5 for 5% off when booking.

Exploring Chicago while on two wheels is one of the most exciting activities one can do. The thrills of being amid art, stunning buildings, smelling incredible food, and interacting with surrounding streets buzzing with activity is energizing! It’s fun as a solo or group activity.

Ditching the car for a bike was one of the first and best decisions I made when I moved to Chicago. With over 330 miles of bike lanes in the city and multiple trails, including the 18.5-mile lakefront path, Chicago is one of the best cities in the nation for biking!

Biking in Chicago is fun in itself but imagine having a local expert guiding you along the way with quality information, keeping you entertained with fun interaction, intriguing facts, and taking you to local spots for food and great Chicago beer! It’s a recipe for a memorable Chicago experience in all the best ways!

Also, you will cover multiple neighborhoods in a short amount of time. Chicago’s downtown is magnificent, but there’s so much more to the city! A guided Chicago bike tour will cruise you through areas off the beaten path. You will absorb things that you’d otherwise likely miss.

Bobby’s Bike Hike is the nation’s longest-running city bicycle touring company. Owner Jeremy named the business after his late father Bob, a professional bus tour operator, who instilled in him a love of education through travel, giving back, health, and the offering of unmatched service.

I not only took this tour and enjoyed it immensely, but I also interviewed Jeremy, the owner, of Bobby’s Bike Hike about his other tours and passion for inspiring others to get outside in the fresh air.

The Bikes, Bites, and Brews tour is a 13.5-mile well-mapped-out tour. Don’t let the mileage worry you. You’re making stops along the way in the neighborhoods for food, beer, sights, and history. If you can ride a bike, you can do this tour. There are even tandem bikes available for preference.

Here are some additional things to expect during the ride.

You’ll relish the stunning views of the skyline. Bobby’s Bike Hike is located in downtown Chicago in the Streeterville neighborhood so the first leg begins with you cruising through that neighborhood on the way to the first stop in the Gold Coast neighborhood.

The last leg of the tour takes you along the Lakefront Trail where you will savor an epic view of Chicago’s Skyline while traveling South. You’ll stop and take pictures to capture all of the beauty.

In between, you’ll take in more of the city’s architecture in various neighborhoods. While on our Chicago bike tour with Bobby’s Bike Hike we passed through areas that I’ve biked frequently en route to places. However, the tour’s map treated me to so many homes and buildings that I’d never seen before!

At the stops, our guide Gabe gave us the backstory of the communities.

In the course of the Bikes, Bites, and Brews tour you will indulge in several of Chicago’s iconic foods while learning about the city’s ingenuity. We ate Chicago’s famous deep-dish pizza at Lou Malnati’s, Chicago Style hot dogs at Wrigleyville Dogs, and Chicago-style brownies at Bittersweet. I thought I’d knew the story of Chicago’s Deep Dish Pizza but our guide Gabe dived deep into the subject. The story is so intriguing. Also, as much as I love brownies, I had no idea they were invented in Chicago!

Chicago has a long history with beer, by 1900, the city’s sixty breweries were producing more than 100 million gallons of beer per year making Chicago a beer-making capital until prohibition and the Great Depression put most breweries out of business.

Today there are over 169 breweries, you’ll sample a variety of Chicago’s craft beers while on the tour.

The Bikes, Bites, and Brews tour is for 21 and older. However, there are plenty of other tour options for individuals and families including several walking architecture and food tours. Several of Bobby’s Bike Hike tours are good for young children. In addition, they provide kid’s and junior bikes, car seats, tag-a-longs, and bike trailers.

Biking in Chicago: Is it Safe?

Many may express apprehension about biking in Chicago but in reality, it’s pretty stress-free. My main transportation around the city is a bike and I wouldn’t change a thing. I’ve had many friends visit who’ve never biked in the city and they do just fine. Here are some things to keep in mind.

Bobby’s Bikes, Bites, and Brews tour is excellent whether you’re a local or visitor looking for the best way to see Chicago in a day. It could also be a great Chicago date idea. Hopefully, you’ll get out and enjoy our beautiful city on two wheels soon. Let me know what your thoughts are in the comments.