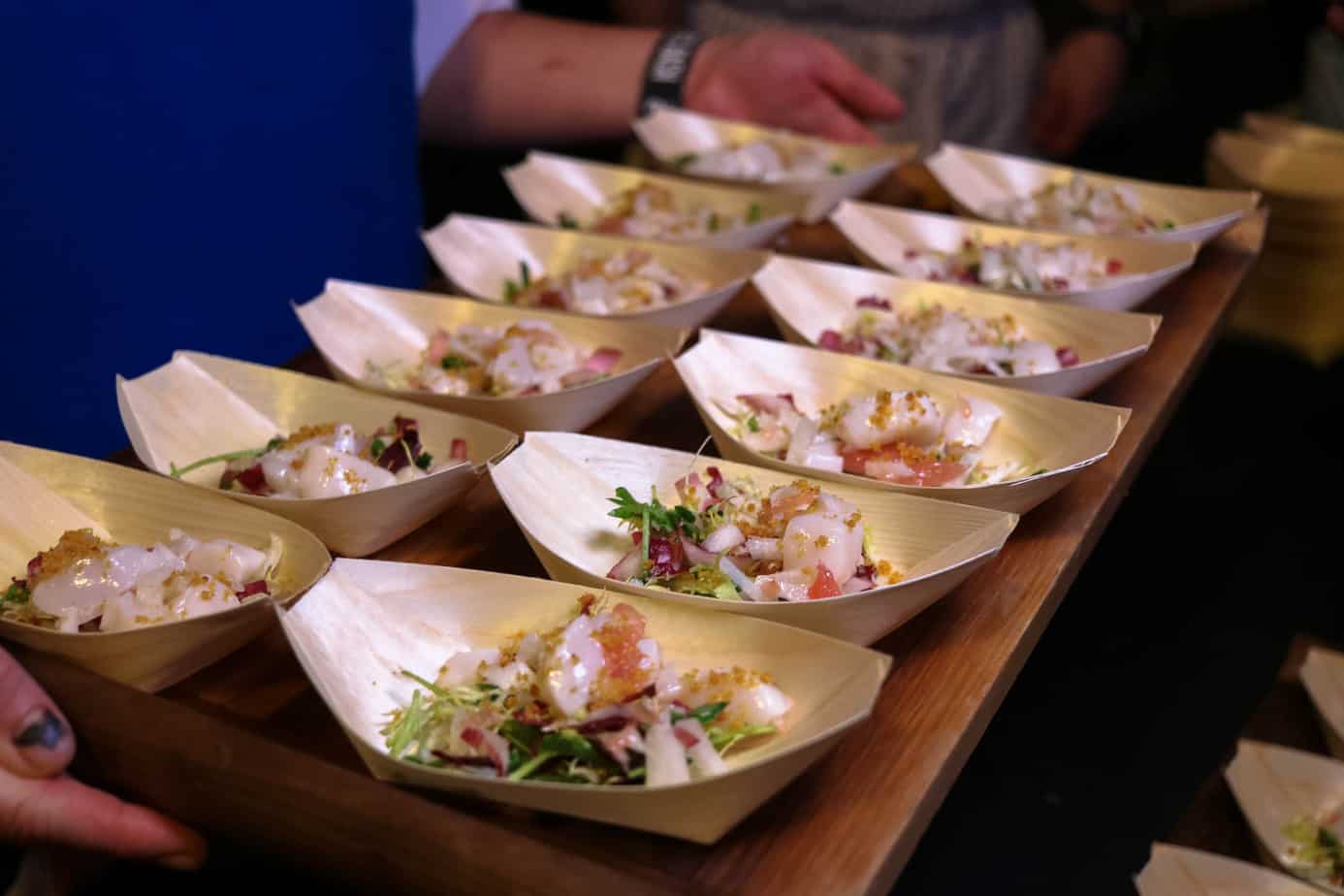 Restaurant week officially got underway with the kickoff event First Bites Bash, held at Navy Pier’s Grand Aon Ballroom. This affair is a paradise for foodies and in my opinion, the best way to get your Restaurant Week activities started.

It’s well known that Chicago’s food scene is off the charts!  With so much variety and amazing cuisine to select from, it can prove difficult choosing where to dive in first.

First Bites Bash puts 60 of the city’s most celebrated restaurants and chefs in one place so that you can try a bit of everything and hopefully plan your Restaurant Week food tour based on discoveries.

I had reservations at three restaurants already in place, but I purposely saved a few spots for new encounters during First Bites Bash.

The event was produced by Choose Chicago and hosted by Boka Executive Chef Lee Wolen.  Originally hailing from Cleveland, Wolen has a stellar culinary resume.  Under his helm, Boka restaurant has maintained their Michelin Star status for the past four years.  He was most recently nominated for a James Beard Foundation Award for Best Chef: Great Lakes in 2016 and 2017.

I was excitedly looking forward to the event which drew well over a thousand hungry food lovers.  Sidenote:  A year ago when I started my blog First Bites Bash was on my radar, but I was just getting my feet wet and decided against going.  I made a goal at that time to build up my blog, and when the event came around again, I’d be ready to attend and cover along with media.  I met that goal this year by being granted a media pass to cover the event.  Therefore, this event was a celebration of how far I’d come with my blogging as well as my food loving Festivus (small milestones excite me!)

Upon entry, attendees were given maps and menus to seek out anything that piqued their taste buds.   There was something for every palate;  seafood, desserts, steak, tacos, wine, beer, spirits…you name it.  No one should have left hungry!

In preparation, I only ate soup for lunch.  I was ready!

I did a good job hitting up pretty close to everything.  Some of my favorite bites from the evening in no particular order were:

The flavors of white truffle garlic crema, cotija cheese, gruyere frances meshed together so well! I did not miss the meat. These tacos are on their restaurant week menu for lunch and dinner. Don’t miss out on them.

I gobbled this dish up before capturing a picture and was too distracted discussing how dang delicious it was. I did manage to get a picture of Chef Cedric Harden and his team though, lol. Take my word for it. This restaurant is worth a visit during Restaurant Week.

Chef Cedric Harden (center) of River Roast and the crew

They’re offering a dinner pre-fix menu with two options of surf and turf during Restaurant Week. That’s a great deal!

They were fresh bites of heaven!

They had a nice punch of acidity. Wow!

OMG, I stood there, ate one plate and grabbed another! Bonus that Ema is the restaurant of one of my favorite Bravo Top Chef alumni CJ Jacobson.

Their assortment of chocolates held me up for a bit!  The bourbon ganache made me close my eyes as I chewed….it was divine!

I’m a fan of anyone who can make me enjoy beets.

9.    Chocolate Sachertorte from The Berghoff.

Always one of my favorites!  Although it’s not on the Restaurant Week Pre Fixe menu, their red velvet cake is and it’s delicious!!!

Chocolate Sachertorte from The Berghoff

There were even appearances by special guests from the Chicago based NBC series Chicago Med.

Chicago Med’s Yaya DaCosta and me

A memorable moment during the night was chatting with the good people from the Greater Chicago Food Depository.   I learned a bit about their fight against hunger and their Food Service Training Program.  This 14-week program is offered at NO COST for accepted applicants.  I plan on following up with them to learn more about their work and share it with all of you.  They’re doing great things!  A portion of the proceeds from the event went towards supporting their efforts, $10,400 to be exact!

Overall a fantastic evening with an abundance of amazing food to indulge in.  I left with an overwhelming excitement for all of the festivities I’d planned for restaurant week.  The diet will have to wait until February!  Hahaha

Hopefully, a glimpse into the preparation for Restaurant Week will move you to get out and try places and cuisine new to you.

If you find a new favorite, let me know in the comments!